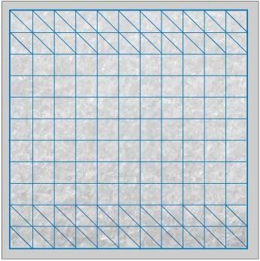 For each player, the goal is to get three points. For the explorers, it is necessary to cross the zone of play until the opposite camp, symbolized by the squares crossed by a diagonal, in order to obtain a point. Once arrived in this zone, the pawn is immune from any freezing. For the cold, you have to freeze an explorer pawn twice to earn a point.

The player controlling the explorers begins.

For the first game turn, players may only move. For subsequent turns, players have the option of either placing a pawn on the first line of their side or moving one.

The player controlling the cold does not have the possibility to place two pawns side by side, either for the positioning or his movements. Nevertheless, it is allowed diagonally.

The players take turns and are forced to play.

Pawns from each side can be moved up to three squares forward or to the sides, one direction at a time. No pawn may move backwards, diagonally or over another.

When a pawn arrives in the opposing camp, (symbolized by squares crossed by a diagonal) it is removed from the board. If it is an explorer pawn, it wins a point, if it is a cold pawn, he returns to his player's hand.

Each cold pawn can freeze the explorer pawns located on the squares in front and next to it. Once the freezing is done, the explorer pawn is placed on its frozen side (white side), it can then no longer move. The cold pawn is removed from the board, which can later be reused by the controlling player. (See diagram below)

Frozen pawns can be saved by being surrounded by at least two explorer pawns.Two or more explorer pawn on adjacent squares form a group. This group will warm up and cannot be frozen.

When one of the two players gets two points, the other player win a bonus.

For the player controlling the explorers, he gets the bonus "Campfire". This bonus allows him to protect all the explorers of a freezing, in an area of eight squares around the dedicated pawn. It can be placed from the third to the fifth line from the explorer camp. Once used, it stays on its position until the end of the game. Cold pawn in this area are removed from the board and put back into the hand of the player controlling the cold. Frozen pawns in the zone are thawed

A stack of two pawn prevents from moving, but works the same way as a normal pawn. During freezing, only one cold pawn is removed from the stack, and the frozen pawn is placed on its white side. A stack of three pawn allows you to freeze all the pawn in an area of eight squares around it. However, it prevents the stack from being moved. During freezing, the explorer pawn is immediately removed from the board and the player controlling the cold gets a point. The stack is reduced to a single counter.  Stacks cannot be formed on the first and last three lines of the board.

The game ends when one of the two players gets three 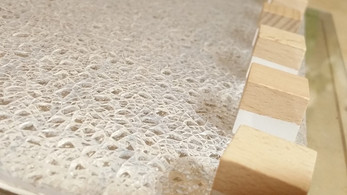